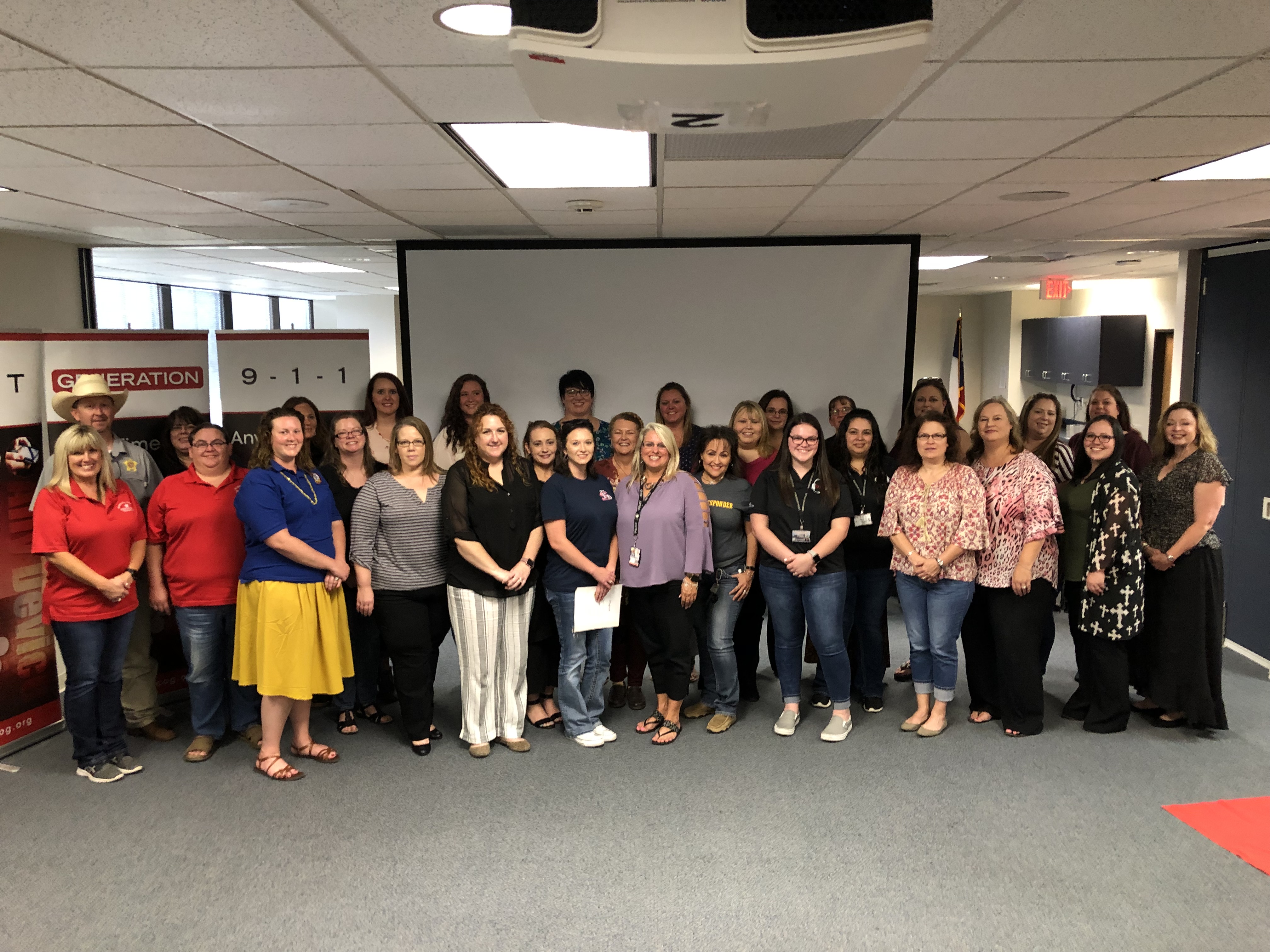 The North Central Texas Emergency Communications District celebrated the passing of House Bill 1090, which reclassifies them from clerical workers to first responders, with a First Responder Commencement Ceremony on Thursday, September 5.

Texas is also the only state that requires telecommunicators to be licensed, which holds them to the same standards as peace officers and jailers. The 9-1-1 First Responder Commencement Ceremony honored the more than 500 NCT9-1-1 telecommunicators and the 43 Public Safety Answer Points (PSAPs) they represent with a challenge coin and the ceremony included Christy Williams, the director of 9-1-1 at NCT9-1-1, and Ricky Rodriquez speaking on behalf of Congressman Ron Wright.

The keynote speaker was the winner of our speech contest, which called upon telecommunicators from the NCT9-1-1 region to submit a 3-5 minute speech on the significance of the first responder status. Our winner was Shawnna Davenport from Greenville Police and Fire, and you can watch her speech below.

Good afternoon, ladies and gentlemen. It is good to be here today because today is historic. Today we have gathered together to celebrate the reclassification of telecommunicators as first responders. Why is that significant? Why is that so important? In order to answer those questions, you must first understand what a 9-1-1 telecommunicator is. Many of you have heard the cliche quotes “The thin gold line” or “The guardians of the three,” etc. However, what is it that makes this job so unique? What is it that makes these people so passionate about what they do? Why do so many feel it is as much a “calling” as a profession?

I started my career in 1983 with Hood County Sheriff’s office in Granbury, Texas. I was seventeen years old. I knew very little about the job and had no idea it would become my life’s work. In 1983 there was no 9-1-1 in our county. When someone called for help, they had to call the police or fire department telephone numbers directly. People used to keep those numbers posted on their refrigerator or next to their telephones, which were still connected to the wall! Home addresses were also posted so children & babysitters could find it in the event of an emergency.

As a child, my two favorite TV shows were Adam 12 and Emergency. Like many of my generation, Paramedics Gage and Desoto or Officers Maloy and Reed were my heroes. They were helping people and saving lives. I gave no thought to the voice in the background that sent these heroes on their missions. The calm professional voice that gave the call details, that relayed the updates, that gave the warnings or that sent additional help when they needed it. The voice with no face, the voice with no name, the voice with no importance or so it seemed. No one wanted to be that voice, after all they were “just a dispatcher.” Little did I know then that I would become that voice and it is so much more.

Many things have changed in emergency services since 1983. Our phones are mobile and no longer attached to the wall. Landlines and payphones have become obsolete. We Google and text as much as we call or speak face to face. We have a national 9-1-1 number system. Nearly everyone in the United States knows when there is an emergency, they should call 9-1-1. We have enhanced 9-1-1 and Next Gen systems to help us locate those that call for help. We can even text to 9-1-1. What has remained the same? Working nights, weekends, and holidays. Rotating shifts, 16-hour shifts with short turn arounds, high stress, employee turnover, and work overload. The 9-1-1 telecommunicator is the first contact in an emergency. This first responder must get the location of the emergency from an often panicked or upset person who may have no idea where they actually are. They must pull the information out of injured or uncooperative callers while remaining alert to any background noises that may indicate there is more to the situation than the caller is saying. They ask a series of questions to determine the nature of the emergency often while typing into the CAD, speaking on the radio, or toning out units at the same time. They must “triage” the call for the priority of response or route the call to the appropriate agency, all within seconds. Most 9-1-1 calls last only a few minutes, yet in that time, the 9-1-1 telecommunicator has gotten the vital information needed to send the caller lifesaving assistance, accessed for possible threats, determined the nature of the fire, gotten vehicle or suspect descriptions, etc. That is, when things go right. However, often things don’t go right.

Telecommunicators must be adaptable, knowledgeable, patient, caring, and yet professional during the most horrific of situations. We are the first contact made, the lifeline for the public as well as those we work with. On the phone or the radio, telecommunicators ARE there. Trying to locate callers who cannot or will not give their location. While listening to the depressed teenager threatening to commit suicide. While giving CPR instructions to the panicked mother of a choking child. While keeping an injured accident victim awake until medics arrive. While whispering to the terrified woman hiding in the closet from an intruder. While sending aid to a wounded officer begging for help. Our ears see what our eyes cannot and it is not easy.  Telecommunicators were there when a tornado ravaged the school trapping children and their teacher in debris. Telecommunicators were there taking messages for loved ones as the twin towers burned & fell. Telecommunicators were there as passengers fought to take back the plane from hijackers and as it plummeted to the ground. Telecommunicators were there as a shooter targeted their own officers outside their own building, leaving several dead. Before the officers, the medics or the firefighters, we were there for every tragedy or disaster. We sheltered in place during hurricanes, while our own homes were destroyed. We stayed until relieved, sometimes for days without electricity or water. We have come home broken hearted and beaten down, only to go back to do it all again the next day. It is not just a job, it is a group of dedicated & skilled individuals, willing to do more than they ever expected to when they first sat down at a console. Gage and Desoto are still my childhood heroes, but now I know it took a telecommunicator to get them there.

Thank you so much to all those who worked diligently to make this happen. We have always known we were first responders and because of your efforts, so does everyone else.  I am proud to be a part of this amazing profession. I am proud of those before me & for those yet to come.  We are the calm in the chaos, the thin gold line, and the protector of the three. We are part of the brother and sisterhood of emergency services personnel. We are the headsets & the call takers.  We are the first contact & the final call. We are as we have always been, we are the voice, and yet we are so much more. We are 9-1-1 telecommunicators and we ARE First Responders!